My build-up to this race hadn’t been the best so my intention was just to see where my fitness levels were, then really target the road races in April and May. However, the closer the race got, the more obvious it became that the MK Festival of Running may well be the last race held for a few months, due to coronavirus, so I changed my plans and intended to race properly.

I watched the start of the 20-mile race, one normally used as a warm-up for the London Marathon, and the field was noticeably smaller than in previous years. Toeing the line at my race, people were trying to stand further apart from each other rather than the usual shoulder to shoulder.

We started into a strong headwind, then turned to head away from the city centre and hit another headwind! By the time we got to Willen Lake, the leader had broken clear and there were a few packs forming. I think I was in the second or third pack, which also included the leading woman. When we left the lake I told myself that I was not getting beaten by the first woman, so I made my kick for home 3km out.

Climbing through a windy Campbell Park was hard work but made easier by having caught up with two other runners, so I had something to work with. The three of us worked together through the park, but once we turned at the top to head back to the Xscape (600m to go) the real race started. We all kicked at the same time and we were still together as we turned on to the home straight.

I crossed the line in 16th place (chip time 39.39, gun time 39.40),with Sophia Cliffe the 3rd woman home and 39th overall (chip time 43.17, gun time 43.19). We were both pleased, considering the conditions, and knowing I’d raced properly today made the evening more bearable, when I received three emails almost simultaneously informing me all the races I’d entered this summer had been cancelled.

Well done to Eliot and Sophia! 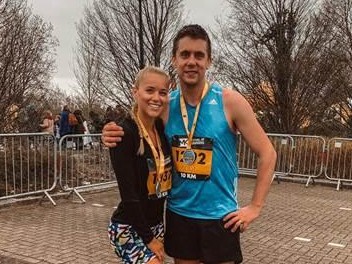