‘The day before the race, the relay team walked the course with Andy [Henderson, the team manager]. He went through the running order and confirmed that I was on the last leg. As we went round we discussed some tactics – although there weren’t many. The plan for each of us was to go out hard, as it was only 1500m, so there’s not enough time to really work your way into it. I don’t particularly like going out hard; I prefer to go at the back, like at Liverpool. But in this case we just had to commit from the start.

‘When the race started I was quite nervous, mainly because I was on the last leg and because the previous time the GB & Northern Ireland team won it [in 2021, in Lisbon, when the team consisted of Sarah McDonald, James McMurray, Alex Bell and Jonny Davies]. But after the first two legs I wasn’t as nervous because we were in 6th place and all I had to do was run as hard as possible and take as many places as I could. But when I watched Alex [Bell] work her way through the runners on the third leg, my nerves increased, especially when she got in the lead and I knew that we could win.

‘When I got the band from Alex, I went off hard. It didn’t feel really hard, like I was flat out, probably because of the adrenaline, but after about 400m I could really feel it in my legs. But as it turned out, going out that hard meant I increased our lead from 4 seconds to 10 seconds within the first 600m or so, and the teams behind almost gave up on first and settled to fight for the remaining podium positions. Although towards the end they did start to catch up, I like to think I took my time to celebrate and that’s why the gap went back down to 4 seconds – but to be honest, my legs were pretty shot by the end and I’m not sure how much more I could have given.

‘Winning was quite surreal. I went from not having won any major races to winning the trial race at Liverpool and then the Euros within two weeks.

‘It was nice to share the win with Luke Duffy. We’ve lived together the past three years, with a lot of running talk and competing against each other head to head and competing for faster PBs. Putting all this aside to race together was a breath of fresh air, but no doubt it won’t last very long and things will go back to normal by the next lot of races.'

Congratulations again on your amazing team gold medal - what a fantastic achievement! Congratulations too to Hannah Nuttall, Luke Duffy and Alex Bell. What a fabulous winning team!


The photo shows Ben with his coach, Kyle Bennett. 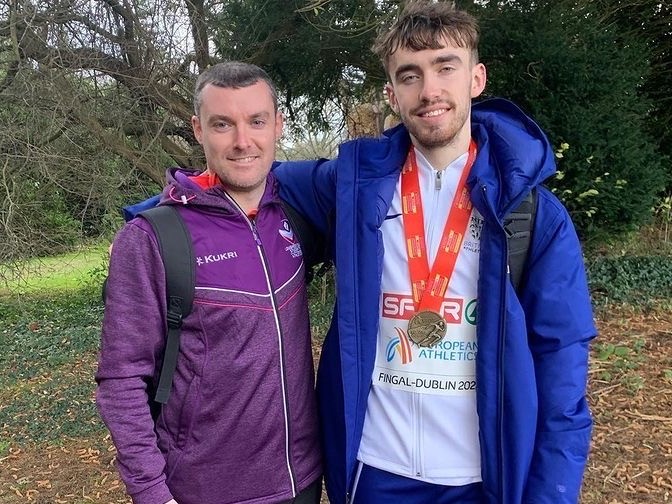