Jim and Kyle Bennett have known Hannah England since she was an U15 athlete. They met when Jim coached at the Chiltern XC races and at the British Milers Club training weekends, when Kyle was competing. Jim and Kyle got to know Luke Gunn when Hannah and Luke started dating when they were at Birmingham University.

We’re delighted that Hannah and Luke have agreed to chat to MKDP, to give us an insight into their lives as professional athletes and now as coaches. The interview will appear in three parts: first a chat to Luke, then a chat to Hannah, then a joint interview on their lives after competing. Keep an eye out for the next instalment!

Luke Gunn
Luke was a GB international runner on the track, cross country and road. Highlights include four National Senior UK Titles at the 3000m Steeplechase and three Commonwealth Games finals. Luke studied at the Florida State University on a sports scholarship, where he captained the team that won the National Collegiate Athletic Association (NCAA) team track championship.
From 2010, Luke began coaching alongside his own running. He has since coached athletes from 800m to marathon distances: his athletes have won seven BUCS individual gold medals and numerous age-group national medals and GB international vests. He’s currently the University Head of Athletics and the British Athletics Talent Hub Manager, the University of Birmingham.

What are you most proud of in your career?
I guess it would probably be my longevity. I was quite a good junior, but certainly not the most talented athlete in my age group, yet I managed a 10-year international career across track, road and cross country disciplines, during which I managed to travel the world and meet so many incredible people. Athletics really can open so many doors of opportunity.

What do you most regret?
I regret not enjoying the journey more. Athletes are often so critical of their performance and obsessed with getting to the end-point as quickly as possible. I just wish I’d had the ability to say more often, ‘Sure, I didn’t run as well as I wanted to today, but I’m competing in this great country and I have my health and fitness. There will be other days…’.
This is something I try really hard to instil in the athletes I coach, as an obsession with results-driven happiness is such a short-term game – and it’s very high-risk.

You went to university in the United States. What was it like? Were the training and racing set up differently than in the UK?
It was brilliant, and an opportunity that had a huge effect on my outlook and performance. The training set-up was not hugely different to what I had experienced at Birmingham, but the scale of support and competition was on another level.
Thankfully the offering in the UK (especially around the main universities) has increased and improved hugely in the past 10 years, and now I truly think it rivals the NCAA offering. It includes many more professional coaches employed by universities, as well as extensive scholarship schemes and elite support services available at these institutions. We are, however, still behind the level of competition offered in the USA.
Postgraduate opportunities to compete in athletics are very competitive and sparse in America, as there is no club system like we have in the UK. Outside high school and collegiate competition, unless you are good enough to ‘turn professional’, there is very little competition infrastructure to target. This means that a lot of people give up sport at the age of 21–22. Of course, in Britain we also lose athletes at this age, but honestly on nowhere near the same scale as in America.

What would your advice be to your athletes if they wanted to go to the USA?
It’s the same advice I give to students looking around UK universities: do your homework. Make sure you seek out all the information you can to help you make your decision, and wherever possible visit the universities before making a final decision.
Many people are emotionally mature enough to go to America at 18, but many (like myself) are not. Moving away from home, to another part of the UK, is a huge transition for most, so I’m always open and direct about asking individuals how they feel about such changes. Everyone is different and matures differently, so it really comes down to the individual.
With this consideration in place, I have been a big advocate of athletes considering going to the NCAA system for a master’s or as a postgraduate, when they are older, more established as an athlete and (hopefully) more independent.

You said (https://www.youtube.com/watch?v=nP1Mgxcctuo&feature=youtu.be) that you retired to focus on coaching because you felt you couldn’t keep an eye on the athletes you were coaching as much as you’d like. Was that an easy decision to make?
In the end, no. When I did retire I hadn’t enjoyed the athlete pursuit for at least 12 months. I was always motivated by making international championships, and for the last three years of my career I had been falling further away from this. I had also known for many years that I wanted to be a coach, inspired by many great people: Bob Ashwood, Peter Wilkinson, Bob Braman, Dave Sunderland and the wonderful Bud Baldaro.
However, I was getting such joy from helping others, especially those at earlier stages of their career. Their enthusiasm was infectious. When a few established GB juniors asked for my coaching input, I knew then was the time to switch to fully being on the other side of the stopwatch.
It was a gradual but conscious drift from athlete to athlete-coach, and then it was a natural step to fully fledged coach.

One of your motivations was to keep athletes together after they’d left university, to give them an option for elite training when few other options existed. How are your athletes doing? Are there any potential international athletes among them? Is it hard watching other athletes competing in races? Do you ever wish you were still racing?
It is going very well! The University of Birmingham has always had graduates choose to stay in the area to continue their training, but this number is certainly swelling at the moment. Some British athletes from the NCAA system are even choosing to base themselves here after graduation, which is a huge honour and a testament to what we have been building.
The university has always had a great scholarship programme, and last year we were selected as a pilot study to host a Talent Hub initiative launched by England Athletics, British Athletics, London Marathon and the Talented Athlete Scholarship Scheme, which has seen significant investment in athletes in the area, including graduates and some seniors.
We have a very strong university distance squad, including GB juniors Amelia Quirk, Oli Dustin, Thomas Keen, James Gormley, Niamh Brown and Sabrina Sinha, to name a few. They are all still coached by their club/home coaches who we work in partnership with – something we’re very proud of, and this is only possible due to fellow university coaches Bud, Dean Miller and Sally Straw. I personally coach GB student-athletes Issy Boffey, Saskia Millard, Cesca Brint, Mike Ward and Ben Thomas, and we have even more talent due to join the team in September. In addition to this, I coach senior athletes Jonny Davies, Mari Smith and Mark Pearce, who are now the key figures in our training set-up. Our aim is to create a perpetual cycle of athletes to build a legacy of Birmingham as an endurance training base.
I love watching the guys and girls race; I get such a buzz from it. But when multiple athletes are racing at once, it can certainly be a rollercoaster of emotions, as coaches take the journey with all their athletes. I can safely say I do not miss competing myself. I thoroughly enjoy my personal running but, after many years on the track, I am happy to not toe the line any more.

The Commonwealth Games will be held in Birmingham in 2022. Will you have athletes competing there? How excited are you about this?
I sure hope so – many of the athletes mentioned above are focused on Birmingham 2022!
It is incredibly exciting for the city, and the Commonwealth Games has a big place in my heart after I attended Melbourne (2006),Delhi (2010) and Glasgow (2014).
Birmingham has exploded in life and innovation in the past seven or eight years, and it’s a place I’m very proud to call home. It still hasn’t sunk in that the Games will be held here in two years, but I think the city will do a great job.

The events of this year – Covid-19 and lockdown – have been extraordinary, and a real blow for athletes who had planned to race in various events, from local races right up to the Olympics. What have you been saying to your athletes to console them about the lost season? Have they been carrying on training as normal?
It has been a real challenge for us all, and everyone has been affected differently and at different times. Some athletes are in PB shape right now; some have maintained a good routine; many others have had periods of good training and periods of demotivation; and some have fallen away altogether (so not that dissimilar to a normal summer, really!).
At the start, we predicted that this was going to be a long haul, so lots of the athletes eased back on their training significantly at the start, worked on areas of weakness, and forgot about racing any time soon.
I gave a lot of the athletes much more freedom in their training, to allow them expression and to stop training feeling like a chore. What was very interesting was that, at first, athletes really enjoyed this but within six weeks nearly all had come back to me to ask for more guidance and structure!
The premise was always that, once we knew there were some races on the horizon, we would start a six-week macro-cycle to get the athletes ready for racing. Although no one knew when that six-week cycle would start, it helped to reassure everyone that we had a mobile plan. We started this cycle three weeks ago, and our athletes are already looking in very good shape to go.

What are your plans for the next few years?
Right now, I’m more than happy where we are, continuing to grow athletics in Birmingham: I feel that we’re only just getting started. I am very fortunate to have an incredible group of athletes and support staff to work with, and the support of a great institution.
My next aim is to assist these athletes to realise their lofty athletic goals on the senior stage. Next summer sees European U20 and U23 championships, two global indoor championships and of course, for some, the Big One.
My professional plan has always been to find a sustainable environment and employment that would allow me a long coaching career, which the University of Birmingham and Talent Hub offers in abundance.

Thank you so much for speaking to MK Distance Project, Luke! We really appreciate it. 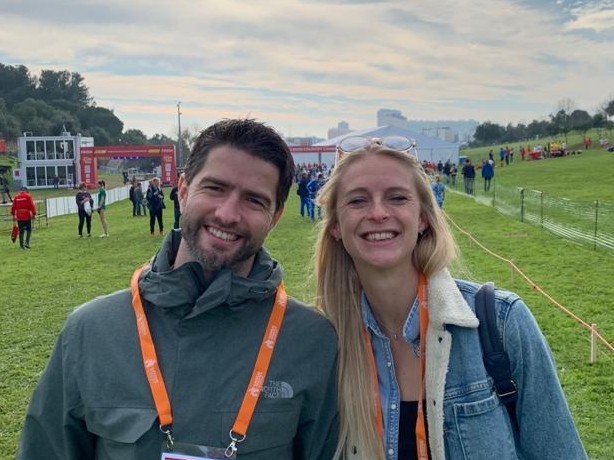