On 3 December Kyle was presented with the award at the 2019 Sport Milton Keynes Sports Achiever of the Year ceremony at Denbigh School, Milton Keynes.

Kyle is one of the two coaches who formed MK Distance Project, which has just celebrated its 3rd anniversary. He is also the head athletics coach at the University of Oxford (a voluntary role): the Oxford team came 3rd at the British Universities & Colleges Sport (BUCS) XC championships in 2019 and Kyle has helped to improve the standard of athletics in the three years he has coached there.

Kyle is an England Athletics (EA) level 3 coach in middle and long distance, sprints, and strength and conditioning. He is on EA’s mentoring programme and regularly attends their workshops so he continues to develop as a coach and can help his athletes improve and reach the highest standard they can. Kyle also helps to organise and run middle-distance races with the British Milers Club, both locally and nationally.

Kyle always travels to watch his athletes compete, both in the UK and abroad. He does all his planning and coaching in his free time and is not paid for any of his coaching roles. He also has a full-time job outside his athletics coaching.

He is only 34, but Kyle has already achieved a great deal in his coaching career. He is passionate about coaching, and his overriding concern is for the long-term goals of the athletes he coaches. MKDP has ten U20 athletes who Kyle has coached since they were ten years old – distance athletes do not peak until their late 20s and early 30s, so it really is a long-term game. Kyle’s athletes do not burn out through overtraining as youngsters, and are rarely injured.

This year, MKDP retained its team position in the 1st division of the Chiltern XL league. Kyle has coached the MKDP athletes in the Chiltern cross-country (XC) league, England and English Schools champions, both on the track and XC, many of whom gained personal bests on the track this summer. He has also coached all MKDP athletes who competed in the Bucks, Beds and Oxon track and cross-country county championships. Athletes he coached represented Bucks, Beds and Oxon county teams in both XC and track. Finally, this year Kyle has coached Ben West (U20) and Dani Chattenton (U23) to both England and GB vests, in XC and on the track.

Kyle said: ‘To receive any kind of recognition for doing something I love is fantastic, and I was surprised and extremely grateful. I would like to thank all the athletes at MKDP for putting their trust in Jim and me. We are very excited about the future of our club.’

Anna Kofoed-Gregory, one of the athletes Kyle coaches, said: ‘So well deserved – one of my favourite people in this world.’

Kyle was a deserving winner of this award, and everyone at MKDP sends their congratulations! 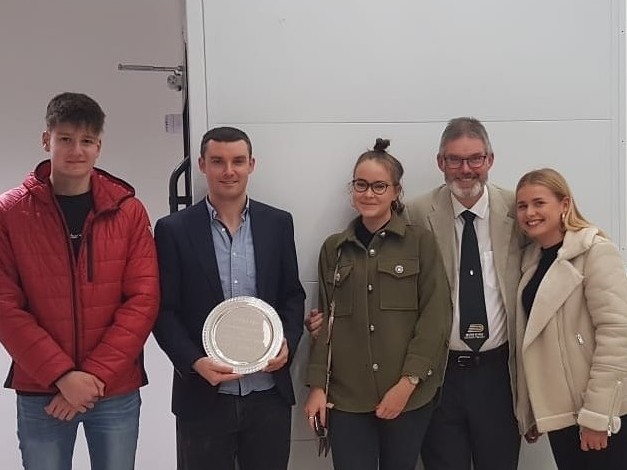